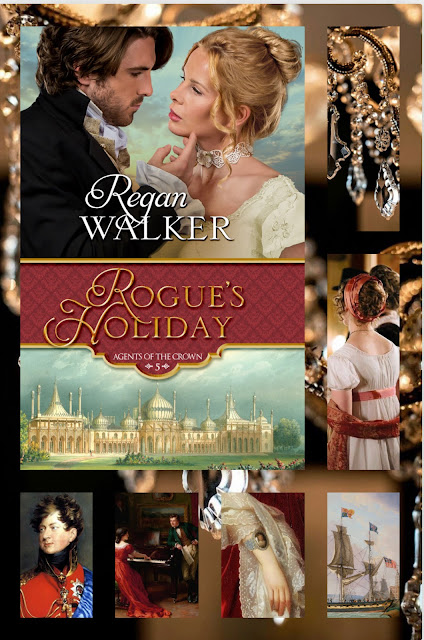 NEW RELEASE! Rogue’s Holiday, my new Regency set in Brighton, is here! It’s the story of Robbie Powell, the bad boy of the Powell family of spies and shipmasters.

Robert Powell’s work as a spy saves the Cabinet ministers from a gruesome death and wins him accolades from George IV. As a reward, the king grants him a baronetcy and a much-deserved holiday at the Royal Pavilion in Brighton where he thinks to indulge in brandy, cards, good horseflesh and women.

But when Muriel, Dowager Countess of Claremont, learns of Sir Robert’s intended destination, she begs a favor…to watch over an “errant child” who is the grandniece of her good friend living in the resort town. Little does Robbie know that Miss Chastity Reynolds is no child but a beautiful hoyden who is seemingly immune to his charms.

Chastity lives in the shadow of her mother and sisters, dark-haired beauties men admire. Her first Season was a failure but, as she will soon come into a family legacy, she has no need to wed. When she first encounters Sir Robert, she dubs him The Rogue, certain he indulges in a profligate lifestyle she wants no part in.

In Brighton, Robbie discovers he is being followed by friends of the conspirators who had planned to murder the Cabinet. Worse, they know the location of Chastity's residence.

What the reviewers are saying:

“An intelligent and beautifully written romance, that is expertly infused with intrigue and danger.”
– Chicks, Rogues and Scandals

“Intriguing and adventurous with a brilliantly written love story.” –  My Book Addiction

“Rogue's Holiday is filled with authentic details and vibrant characters that bring the Regency period to life. Fans will love the spirited, independent-minded heroine paired with a spy hero loyal to the crown. Action and romance abound as they become embroiled in an exciting adventure based on the real-life Cato Street Conspiracy.”
– Kate Bateman, bestselling author of Regency romances

“Regan Walker writes in such as way as to invite the reader to step amongst the characters, partaking of the sights, smells and their conversations. A perfect read for fans of Regency Romance.”
– A Reader’s Review

On Amazon US, UK and Canada
Posted by Regan Walker at 1:00 AM