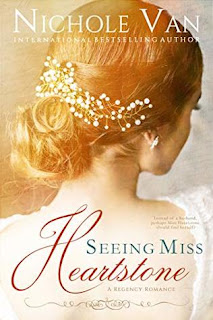 I loved how this story began. Miss Belle Heartstone, a young woman successful in business, thanks to her father, decided to take the advice of Colin Radcliffe, Marquess of Blake, the man who rejected her proposal of marriage and live her life without a husband, at least for the time being.

She knows Blake is debt-ridden and needs money to sustain his inherited lands so, without disclosing her identity, she gets her solicitor to offer Blake money as an investment in trade. He thinks he’s dealing with an older man, not a woman. So, he accepts the funds and goes off to India, all the while partnering with a person wise in business he knows only as LTF.

Over the next years, Belle and Blake engage in correspondence that reflects their success in trade in fabric, spices and other things. The author very cleverly presented us with endearing letters that included riddles. By the time Blake comes back to England, he and LTF are best friends.

The first half of the book was excellent and captured my interest, however, in the middle, it sagged rather badly with repeated thoughts and introspection. How many times could he wail his betrayal at the hands of a woman he met in India? How many times could Belle beat herself up for “betraying” him by not revealing her identity (which, in my mind was no betrayal at all).

Halfway through, I began skipping paragraphs. And missed nothing. At 315 pages, I think the author could have edited the middle to delete whole passages without losing a thing. And I found the hero’s intense anger at Belle when he discovers who she is unwarranted and, frankly, ridiculous. What he would have been is delighted to discover the women he has become attracted to is his best friend.

Except for the sagging middle and Blake’s unrealistic reaction to Bell’s identity, it was well written and clever. The ending was sweet, too. I’d like to read more by this author to see if her other stories have a more consistent pace.
Posted by Regan Walker at 9:30 AM