It’s that time of year when I share my favorite heroes and heroines and I catch up with my reading in all genres. One of the ones I read this year that I liked very much was Arabella. 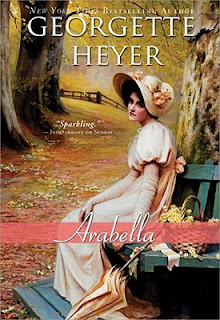 Heyer brings great detail to her stories and I love that. This is a Regency about, Arabella Tallant, the daughter of a Yorkshire vicar who goes to London at her godmother’s invitation, hopefully to find a worthy husband. On the way, her carriage breaks down outside the hunting lodge of the wealthy Mr. Robert Beaumaris. Her pride is stung when she overhears him besmirching her purpose, so she pretends to be an heiress, a pretense that deeply amuses the jaded Beaumaris who decides it would be amusing to make sure she is thought by all of London to be just what she claims to be.

When compassionate Arabella rescues an abused chimney sweep and a mixed-breed mongrel, she foists them upon Beaumaris, who finds he rather enjoys being her partner in the role of rescuer. When Arabella’s younger brother, posing as someone else, gets into deep gambling trouble, Beaumaris comes to his rescue.

Arabella turns down her many marriage proposals knowing they only want the money they think she has and finds herself in a quandary knowing she can never marry a man unless he knows the truth, which she can never divulge.

A wonderful story. Arabella is a delightful heroine and Beaumaris is a great hero, a man who, in the end, does exactly the right thing for the women he has come to love.