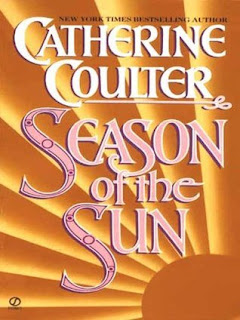 A well-told Viking tale set in the Danelaw (Danish-ruled territory of England) and Norway in the late 9th century. Like others of Coulter’s, she doesn’t hold back when it comes to the violence of the times nor the cruelty inflicted on a worthy heroine by a bold alpha male who has his information wrong. I love that about her writing, but some who are looking for a softer story might not. If you can get past that (and I did), the story will hold your attention and I highly recommend it. Coulter’s portrayal of loss and grief were, in my opinion, nothing short of brilliant.

It tells the story of Magnus Haraldsson, a jarl from Norway and a merchant, who on a trip to York, spots the woman he wants for his wife, beautiful Irish Zarabeth (I pictured a young Maureen O’Hara). He introduces himself to her, basically telling her she will wed him. He’s direct about his accomplishments and knows when he kisses her she finds him attractive. Innocent Zarabeth will have the Viking if he’ll take her young deaf half sister, Lotti, which he will. But her evil stepfather, Olav the Vain, who wants her as his own wife, forces her to reject the Viking threatening to kill Lotti who he loathes.

Zarabeth rejects the Viking and he sails away, bitter at her action. Olav weds her, but never beds her due to his poisoning by his son’s greedy wife. Zarabeth is framed for Olaf’s murder and at her trial, Magnus arrives to persuade the court to make Zarabeth his slave instead of killing her. Thus it is that Zarabeth sails for Norway with Magnus, but as his slave, not his wife.

Talk about the perils of Pauline! This heroine had her troubles in spades. Both she and the hero at times seemed a bit dense. Initially, she failed to trust Magnus to help her and he believed the lie she did not want him. But each has courage that is compelling. The whole time I was reading her misadventures, I kept thinking that this is one hero who is going to have to grovel big time in the end. And I was not disappointed. Neither will you be. Both Zarabeth and Magnus will suffer before they find happiness.

I thought Coulter did a superb job in this well-researched tale of the Norsemen. It’s exciting, fast-paced, detailed and well written. For Viking romance lovers, it is not one to be missed. A keeper!

Season of The Sun
Lord of Hawkfell Island
Lord of Raven’s Peak
Lord of Falcon Ridge
Posted by Regan Walker at 9:32 AM