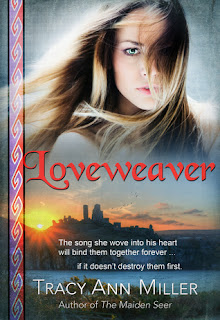 The story begins in Hedeby, Denmark in 895 as Llyrica, a weaver who weaves spells into her beautiful trimming design, disguises herself as her old Aunt Solvieg, an expert weaver and resident “old crone”. Llyrica is discovered by a flesh peddler who would have her for himself. He takes her from her home, along with her brother. They end up in the waters off Wessex, she in the hands of a Saxon warrior named Slayde the StoneHeart, ealdorman of Kent, and her brother (unknowingly) in the hands of their Viking father.

It’s pretty much instant lust on Slayde’s part, no matter they are in freezing water and he is saving her from a shipwreck. But, being the strong “I need no woman” man he is, Slayde ignores his sexual attraction for her and goes about his business. During the day, he berates her in front of his men, accusing her (without reason) of being a whore. But at night he “sleepwalks” to her bed where he whispers sweet words of love.

Llyrica is determined to reach the Danelaw where her father, Haesten, is a feared warrior. (She has no idea that’s where her brother ended up.)

Initially, I found the author’s word choices and writing style a bit difficult to wade through, but once I got accustomed to it, I found the story entertaining and wanted to see what happened. Miller has obviously done much research into the Viking culture and London of the time and I really enjoyed the historical detail.

Llyrica is a clever heroine who will have Slayde on her terms. Slayde, determined to resist, has not a prayer. Many secondary characters add to the story, making it a rich tapestry. And some exciting scenes will keep your heart pumping. It’s also intriguing with the spells woven into the cloth by the “songweaver”.

Viking lovers will enjoy the match between a Saxon loyal to King Alfred and a Viking maiden from Denmark.
Posted by Regan Walker at 9:28 AM