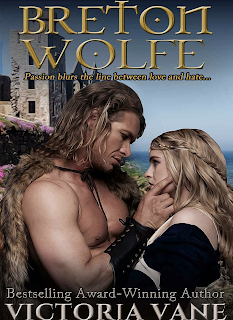 Set in 10th century Brittany, this is the story of Adele of Vannes, the daughter of a duke and granddaughter of a king and the Viking who claims her. Adele was bartered at birth in a marriage treaty for the sole purpose of producing a royal heir. When her philandering husband, the duke, is slain by Norse marauders, she marries their chief in order to protect her home and her people.

Valdrik Vargr, “the Norse Wolf”, has dreams of a dynasty and so he uses his might and his shrewdness in statecraft to conquer Brittany and claim Adele’s hand to sire sons from royal blood to solidify his hold.

Vane does a wonderful job of bringing us into the times of the Norsemen who arrived in France (Brittany in this case) not to pillage but to conquer and settle. Vane does her research and it shows. This is the first of three short tales that involve the matches made by Valdrik and his men. A great short read.


The Wolves of Brittany Trilogy of Novellas:

Breton Wolfe
Ivar the Red
The Bastard of Brittany
Posted by Regan Walker at 12:00 PM