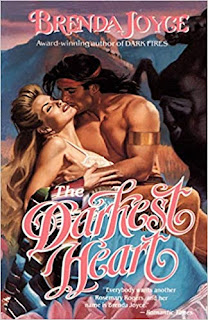 I was really excited to read this story as I loved Joyce’s Fires of Paradise. In that book, the wonderful hero, Shoz Savage, who is part Apache, remembers his parents with great fondness and speaks of their continuing love for each other. Now we have their story.

Set in the New Mexico Territory in 1860, beautiful blonde Candice Carter, a rancher's daughter, has made a foolish decision, eloping with one of her suitors against the wishes of her father and brothers. But the man has no intention of marrying her. He is a despicable cad out to take her virtue. When she realizes he intends to rape her, she shoots him and flees.

Dying in the desert, she is found by Jack Savage, a half-breed Apache, who brings her back to life. Though the attraction is immediate, Jack is honorable and intends to return her to her family unscathed. But when he is wounded, she steals his horse and leaves him. He will rescue her twice more before it's all over in this fast-paced romance that kept me up reading late into the night.

This is a great story of the American west where prejudices against Indians and children with Indian blood ran high. This tells the story of the Apache culture and the wars between Cochise and the white men who betrayed him. Our hero gets caught in the middle, neither white nor red. He is torn.

Joyce weaves a complex tale of love, lies and betrayal. I highly recommend this one.

The Darkest Heart is a prequel of sorts for Joyce's Bragg Saga: