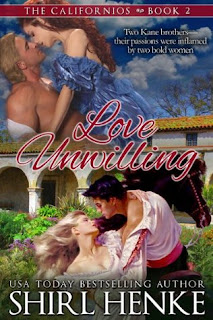 This was Henke’s second book in the Old California Couplet (Golden Lady was her first). Love Unwilling is really two romances in one and Henke presents them very well, entwining the lives and loves of two brothers who make very different choices.

Set in 1848-1853, it tells the story of David and Miguel Kane, heirs to the sprawling Cien Robles (Hundred Oaks) ranch in Southern California. Their parents’ marriage had been one of necessity in order for the Alvarez family to infuse money into their Spanish land grant after California became a part of the US and subject to Yankee laws.

The marriage was so divisive that David was named and claimed by his father, the rich Yankee sea captain, and Miguel by his mother the Californio aristocrat (who’d planned for him to become a priest). Years later, when David gets into trouble, killing a man after a card game and flees with an Irish lass he has deflowered named Kate, Miguel’s father claims him as heir and tells him he’ll marry the neighboring rancher’s daughter, Ellie St. Clair, originally intended for David.

David and Kate flee to gold country where David supports them on his gambling winnings and Kate keeps house, soon falling in love. The other brother, Miguel, stays home to take on the ranch and finds he loves it, but he’s not interested in marrying the St. Clair girl and she doesn’t want him either.

We’ve all seen the family where the oldest son is expected to be the one to assume control of the father’s business, but what if it wasn’t so? What if it were the younger son? (Or, these days, a daughter?) Well, this story shows what can happen when the apple cart is thrown off the intended course. It’s about choices and second chances and making your own life, not just fleeing the bad choices your family might force on you. I have to say my favorite character was Kate…she had the strength of Irish womanhood and was beautiful as well.

The brothers were both cads for much of the book, and for all his faults, David was faithful to Kate. Miguel, on the other hand, had a bad habit of visiting whores before and during his marriage to Ellie. And he believed a cattle rustler over his loving wife. Argh!

Kudos to Henke who sets this story in the Old West at an interesting historical time when the Californio rancheros were fading and their culture losing out to the Americans who were flooding into the state. Meticulously researched, Love Unwilling brings this time to life with great characters, engaging dialog and wonderful descriptions.

Henke is truly a master storyteller. I recommend it!
“Regan Walker is an excellent reviewer. Doesn't pull any punches but praises good work. I trust her.”
SHIRLEE BUSBEE, NY Times Bestselling author