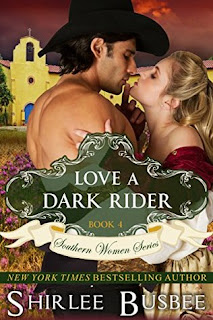 June is Western Historical Romance month on the blog and I’m starting with a great one. I promise Love a Dark Rider, a tale of ambition, betrayal and murder, will put you in the Old West.

The story begins in 1860 in Texas where Sara Rawlings, left alone and destitute by her father’s death, goes to live with a cousin, Sam Cantrell, a man her father’s age. Sam has a son, Yancy, by his first wife—a woman of noble Spanish linage—and he has a young wife, Margaret—the woman he stole from Yancy.

As might be suspected, Margaret is threatened by the younger, 16-year-old Sara. And Sara is captivated by Yancy, a man Margaret was once engaged to and now thinks to seduce. The one thing Margaret wants for her unborn child is Casa Paloma, a thousand-acre parcel in the middle of the land Yancy’s Spanish ancestors have owned for generations. Yancy vows he will kill her before she can have his land. And then Margaret turns up with a Spanish dagger in her chest.

Much of the book is taken up with the machinations of the family and its history that has led to the distrust, if not dislike, between its members, all of which Sara must suffer through. In the midst of it, Sara and Yancy find love, albeit like two prickly people coming together.

Busbee’s descriptions of Texas and the hacienda are superb. You will feel you are in the old West. Yancy is a drool worthy hero and Sara finds him so. Oh yes, the murder mystery remains unsolved until the end. Busbee will keep you guessing. Very well done.

For Busbee fans, it will not disappoint.