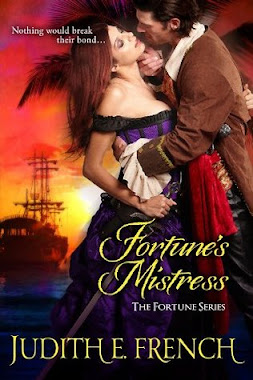 Set in England and the Caribbean in 1672, the story begins as Lacy Bennett, marked as a witch, is bound for Tyburn gallows in London. When the guards worry that a pirate, James Black, one of the prisoners, may try and escape, they chain him to Lacy. However, Lacy has an escape plan of her own. Lacy’s brothers come to her rescue and create a disturbance in front of the gallows, enabling Lacy and James to escape—bound together.

Though a series of events, Lacy and James sail away on her family’s boat across the Atlantic where James seeks to recapture Incan gold he and his fellow privateers lost when their ship was sunk. Betrayed by the pirate Henry Morgan, James is taking no chances when he runs into a man he thought was his friend who demands his share of the gold and Lacy. But James bargains, using Lacy as collateral as if she were his possession, ending Lacy’s trust. But not her dreams, dreams that the gold will allow her to achieve.

French has taken great pains to get the setting, history and details right while weaving a fascinating tale of a woman who, though a wrecker’s daughter and of low birth, is smart and courageous and beautiful. You cannot help but love her. And the hero is the bastard son of Charles II, shunned by his father, who wants to regain what he views as rightfully his. To do so, he is not above using Lacy. He falls in love with the beautiful redhead, but will offer her no more than a courtesan’s life. Though she returns his love, Lacy will not be his kept woman.

French has created wonderful characters, including an Incan warrior who believes Lacy’s visions of future events makes her the “star woman,” foretold in their legends.

It’s an exciting tale from beginning to end with many threads that had me eager to know where the story would lead. I highly recommend this saga of pirates, privateers, legends and the high seas. It’s well told and wonderful!