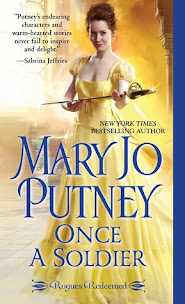 The story begins in Portugal in 1809 as five men are imprisoned in a cellar, awaiting a firing squad in the morning. Among them is Major Lord Masterson, “Will” to his friends. With some knowledge of their surroundings, he finds an escape tunnel and all five men gain their freedom, going their separate ways but agreeing to send letters to Hatchard’s Bookstore to keep in touch.

I have to say, I like the set up for the Rogues Redeemed series.

Five years later, in 1814, the war with Napoleon is over and Will is tapped for an assignment in San Gabriel, a small (fictional) country lying between Spain and Portugal, ravaged by the French General Baudin, who stole away their king and his heir. Will is to gather information on the country’s condition and escort some of the San Gabriel soldiers back home. Once there, he meets the young Princess Maria Sofia and her governess, a tall English “Amazon” named Athena Markham.

Very early in the story, after one fairly vanilla kiss, Athena tells Will she won’t be his mistress (like he ever asked!). His response is to think of marriage. Having broached that subject early, they decide to get to know each other by telling each other their secrets and in their long exchanges, they recite their backgrounds and their losses (his wife and child died; Athena is illegitimate, etc.)

Impressed by the needs around him, Will decides to stay in San Gabriel and help the people rebuild. Putney introduces some charming characters, including Princess Sofia who, with the help of Athena, is holding the country together in the absence of her father and brother who are believed to be dead at the hand of General Baudin.

Especially toward the end, there are some exciting scenes of battle as the people of San Gabriel fight for their country. The dialog is good and Putney does a great job of conveying the beauty of the small country.