Victoria Holt’s THE DEMON LOVER – Gripping Story of a Tumultuous Love, a Victorian Bodice-Ripper set in England and France 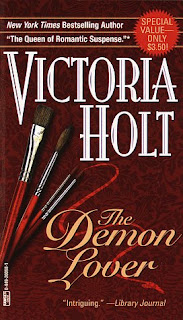 Just so you know, this is not your ordinary Victoria Holt gothic murder mystery. Set mostly in France in the late Victorian period, this tells the story of Kate Collison, of the famous (fictional) Collison family of brilliant painters of miniatures, each artist signing the portraits “KC.” In each generation, the next son takes up the art to astound patrons in England and in Europe. Unfortunately, Kate’s mother, the daughter of a duke, gave Kate’s father, Kendal Collison, only a daughter. But Kate was determined to become better than any son of the family who had gone before her.

When her father develops cataracts and his ability to paint the fine strokes diminishes, she becomes his eyes. Signing the portraits “KC,” as all in her family have, no one would know a woman had painted them. A new commission arrives from a baron in Normandy who wants miniatures of himself and his fiancée, a princess. So, Kate and her father travel to France, intending to do the miniatures together. At the baron’s castle, before he arrives, Kate begins to fall in love with the baron’s cousin Bertrand de Mortemer. And then she meets the Baron, Rollo de Centeville, who by his own description is “arrogant, overbearing, impatient and self-willed.” In addition to that, he was clever, soon figuring out that the miniature he comes to admire is being painted by Kate, not her father. He also intends to have his way with Kate, no matter the cost to her.

An ingenious, intricately woven plot that had me turning pages, it tells the story of a selfish man who, like his Viking forbears, thought nothing of raping a woman to get what he wanted. And so he drugs and rapes Kate and then holds her prisoner for the purpose of reminding Bertrand that he, the baron, is in control. I must say that I had a bit of trouble understanding how Kate, having gone home to England, could return to France after what happened to her, or how she could keep from those who loved her that she’d been brutally raped by the man they admired. Nor could I understand how the Baron’s mistress, Nicole, would, after being cast aside by the Baron, try to convince Kate she should be more understanding of him. But such are the twists and turns in this story.

I loved Kate’s spirit, her determination and her strength. And I thought the way Holt showed how the artist gleaned the nuances of the subject’s personality while the painting was masterful.

As in all bodice rippers, there is a certain satisfaction is seeing the Baron have his comeuppance, though even then, one can certainly agree with the hatred Kate feels for the man who ruined, as well as benefited, her life. Unlike some of her stories, Holt brings the heroine’s feelings about the “hero” (sometimes the baron seemed more the villain) to the fore early on, and that was good.

Holt does a brilliant job of showing us what the people of Paris lived through in the 1870 siege of the city by the Prussians when the people were starved into submission.
Like her other novels, it is told in the first person. A well-written bodice ripper, it does contain rape; and while there are no details or vivid descriptions, the fact of it is no less horrible.

There’s a surprise ending awaiting you. The story is a keeper. I recommend it.
“Regan Walker is an excellent reviewer. Doesn't pull any punches but praises good work. I trust her.”
SHIRLEE BUSBEE, NY Times Bestselling author