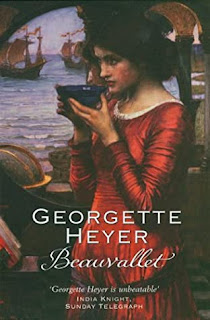 Set in 1586 in England, France and (mostly) Spain and the waters off their coasts, this is an early work of the classic author, Georgette Heyer, a swashbuckler with an English aristocrat, Sir Nicholas Beauvallet. “Mad Nicholas” prefers sailing his ship and troubling the Spanish galleons to enjoying the wealth he had gained and the family estate in England.

On one of his excursions, Nick captures a Spanish galleon carrying Doña Dominica de Rada y Sylvan, a young maiden returning to Spain with her ailing father. Instantly he is in love with Dominica, who is quite a brat at first, and vows to return her and her father to Spain. But Nick tells Dominica he will reclaim her within a year. She protests but is secretly thrilled. The man to whom her aunt would wed Dominica is loathsome to her.

Nick was well-loved in England. Queen Elizabeth adored him and his friends included many notables, such as Sir Francis Drake. But to his enemies, he was the "Scourge of Spain".

This story is all about the hero and his noble (and quite funny) valet, Joshua. Though Nick is quite full of himself, he is charming in his conceit, and apparently, his conceit is justified.