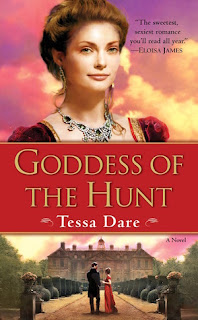 Set in England in the autumn of 1817 when old friends are gathering at Waltham Manor as they have since they were children. Jeremy Trescott, who is now an Earl, leaves his own estate of Corbinsdale Woods (a dark and forbidding place) to come into the light and fun of Waltham where he can enjoy himself and his friends--even though he doesn't like to hunt.

Growing up without love and with a stern father, Jeremy has closed off his emotions. But this year, things are different. His friends Felix and Henry are married and Toby is about to become engaged to the sweet thing named Sophia who is also at Waltham. Only 29 year old Jeremy is left a bachelor. Oh yes, there is Henry's younger sister, Lucy Waltham, a tomboy who hunts and fishes with the men--the “Goddess of the Hunt”.

Lucy has been in love with Toby for years...or so she believes...and decides she must act now or lose him forever. Being a complete innocent, she decides to “practice” kissing with Jeremy so she can seduce Toby. She comes to Jeremy’s bedroom in the middle of the night to do just that. Jeremy decides to teach her a lesson and show her what a real kiss is. But he isn’t prepared for his reaction to the woman who responds to him.

It’s a clever story that takes place mostly at one country estate (and then at Corbinsdale Woods). I loved the beginning with the old friends together and Lucy and Jeremy fighting their attraction. The chemistry was very good. And Jeremy is drool worthy. But once the story moves to Corbinsale, it does change a bit in pace. The hero and heroine have misunderstandings, are physically apart for a while and the action slows. Still, it is an entertaining read.

I agree with one other reviewer that the second half was not as good as the first and the ending was a bit drawn out. I'm not much for pages of main character angst. Just give me a good story and some action in my romance.