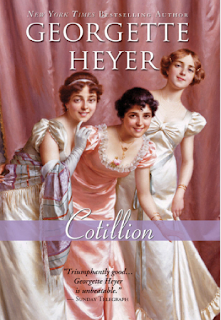 Set in the Regency era, this is the story of Catherine (“Kitty”) Charing, the ward of Matthew Penicuik, who conceives of a way to give his wealth to Kitty while seeing her wed. Penicuik calls together his great-nephews together to tell them of plan: his fortune will go to Kitty if she marries one of them.

Kitty is willing but only if the right cousin proposes. She once set her heart on the handsome cousin, Jack Westruther. Jack has no inclination to marry her anytime soon. But Kitty devises a plan wherein she convinces her cousin Frederick Standen to pose as her fiancé, hoping to make Jack jealous. But Freddy turns out to be Sir Galahad.

In London, Kitty tours the town with Freddy and gains a wardrobe when Freddy’s sister, Meg, takes Kitty under her wing. Then the mix-ups begin. Cousin Lord Dolphinton has fallen for a merchant's daughter in conflict with his mother. Meanwhile, Kitty’s French cousin, Camille, a professional gambler, tries to win the heart of beautiful Olivia Broughty, who is the object of cousin Jack’s dishonorable intentions. And when Kitty’s compassion leads to all sorts of unintended troubles, Freddy comes to her rescue.

There’s lots of fun in this one, even if you—like me—have some trouble understanding what the characters are saying. I loved Freddy and found Kitty delightful.