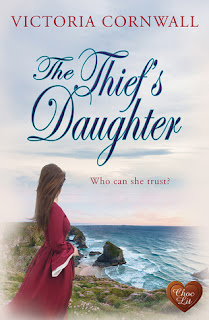 Set in Cornwall in Georgian England, beginning in 1779 (with a prologue set in 1765),  this is the story of Jenna Cartwright Kestle, the virtuous daughter of thieving parents and a sister to brothers who were always in trouble with the authorities.

When Jenna is only four, the thief-takers carry off her older brothers and her parents, leaving only Silas, her last brother. She lives in fear of thief-takers ever after.

As the story begins, Silas is in debtor’s prison and asks for Jenna’s help to pay his creditors. He lies to her about his wife and children being in prison with him to gain her sympathy. Silas is an altogether bad actor but Jenna doesn’t yet realize it so she decides to get a job to pay her brother’s debts.

Jack Penhale, a thief-taker, hunts down the smuggling gangs thriving on Cornwall’s coast. The author vividly portrays the mood of the time as to the smugglers and men in prison for debt. Jack is particularly interested in the smuggling gang led by Ames and Job Blake because they took his father’s life.

When Jenna comes to the job market, he hires her for his housekeeper to tend the Captain’s Cabin he’s rented for its proximity to the coast. Jack is a noble character who only means good to Jenna. She is a bit clueless when it comes to her brother, allowing Silas to lure her into a smuggling scheme.

The author developed well the characters and their conflicting emotions. Though life for them was hard and bad things happened, the ending is sweetly romantic.
“Regan Walker is an excellent reviewer. Doesn't pull any punches but praises good work. I trust her.”
SHIRLEE BUSBEE, NY Times Bestselling author