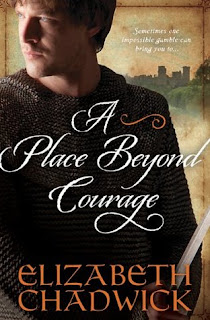 October is Medieval month on Historical Romance Review. I’m starting with a deep historical. Set in the twelfth century, beginning in 1130, this is the story of John FitzGilbert, the Marshall for King Henry I, and Sybilla of Salisbury set against the war between King Stephen, who followed Henry I, and Matilda, Henry’s daughter.

When King Henry I dies, and his nephew, Stephen, becomes king, he rewards John with castles and lands. John, it turns out, was a master at organizing everything that made the king’s castles and life run smoothly. And a very powerful man. He was also a brilliant and courageous warrior. But when John’s jealous rivals persuade King Stephen that John is not loyal, he changes allegiances and backs Henry’s daughter, Matilda. In the process, his first marriage is annulled and he is forced to marry Sybilla.

I loved this story. Chadwick brings alive twelfth century England and its warring factions in a rich historical tapestry of well-drawn characters based on solid research. It’s a time in history when both men and women face challenges absent in normal life and where marriage was only a tool of political leaders. Love, if it came at all, was an unexpected boon. And if a man who was a strong leader found a wife of ideas and well thought out opinions, he found a new life. Sometimes a match made for political reasons produced a bond stronger than life.

In this story we also get to see the young William Marshall, son of John and Sybilla, when he is taken hostage by King Stephen. William will become a great knight. (His story is told in The Greatest Knight.)

Get lost in medieval England and enjoy Chadwick’s meticulous storytelling!