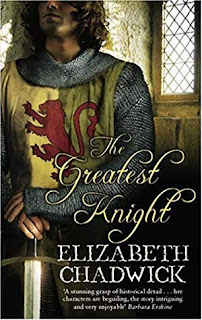 This is the second in the William Marshall series (see list below). Set in the 12th century, it tells the story of William Marshall, a young knight who rose to be the greatest knight on the tourney circuit and the favorite of Eleanor of Aquitaine. Chadwick paints a vivid picture of a man who took advantage of every opportunity and, with honor and commitment, never disappointed. Along the way, he meets his true love, Isabelle de Clare, a countess who made William a magnate. I enjoyed seeing their love develop and the strong woman Isabelle was, admired by her husband. Together, they forge an alliance that withstood the test of time.

I love how Chadwick weaves historical fact with her believable fiction. The characters come alive and the history unfolds all around you. Truly a splendid adventure well told!

A Place Beyond Courage
The Greatest Knight
The Scarlet Lion
The Time of Singing (The King’s Favor in the US)
To Defy a King
“Regan Walker is an excellent reviewer. Doesn't pull any punches but praises good work. I trust her.”
SHIRLEE BUSBEE, NY Times Bestselling author