Elizabeth Kingston’s FAIR, BRIGHT AND TERRIBLE – A Rich Tapestry of Emotions in this Story of Love after England Conquered Wales 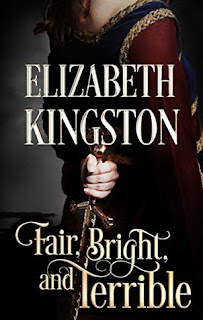 Set in the late 13th century, this is the second in a wonderful series, a story of love between a Welsh noblewoman and an English knight after Wales has been brutally conquered by Edward I.

Eluned has lost her country and her hope. But she intends to have her vengeance on Mortimer, the English nobleman who was responsible for the death of the Welsh leaders. She has a calculating mind and plans carefully how she will do it. When her husband dies and she has the chance to marry Robert de Lascaux, the man she fell in love with 18 years earlier, she takes it as it will give her access to the English nobility.

When Robert is asked to marry the woman he loves but has been denied, he gladly accepts thinking he will at last have the woman he wants. But the lady who greets him at the altar has so little in common with the girl he adored that he begins to doubt that there is anything left of her.

Kingston weaves a rich tapestry of intrigue, treachery, stalwart love and lost dreams realized. Medieval Wales is brought to life. The story will draw you in as you eagerly hope for love to be regained. A beautifully told tale with deep emotion... one not to be missed!

I recommend reading the series in order as they are closely related.