Jennifer Roberson’s LADY OF THE FOREST – An Opus Telling of the Robin Hood Legend, Rich in Historical Detail 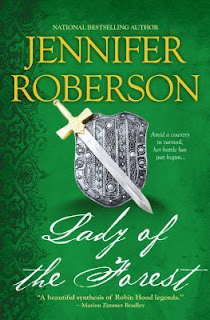 Set in Nottinghamshire in 1194, at 608 pages, this is a thorough telling of how Robin Hood came to be… and the love story of Sir Robert (Robin) of Locksley and Lady Marian of Ravenskeep. In the words of the author, it’s “…a fictional interpretation of imaginary events leading to the more familiar adventures depicted in novels…” And so it is.