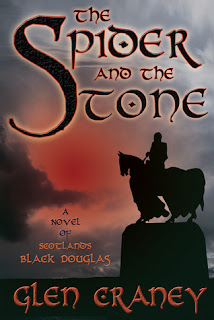 Set in the late 13th and 14th centuries, this is the story of Sir James Douglas (“the Black Douglas”) who aligned himself with Robert the Bruce and became a hero on the battlefield.

Graney brings us some wonderful characters, not all of whom are real historical figures and some delightful episodes of fantasy. I loved the Culdees and their defiance of the Roman Catholic church. And the Scottish women and one from France rise to the fore. Great dialog and some wonderful one-liners added to the story, too.

While there is no historical record of it, this version makes a love match out of James Douglas and Isabelle (“Belle”) McDuff, who was married to a Comyn. The beginning where Queen Isabel of England (who was French) is retelling the tale to James Douglas’ son seemed unnecessary to what was a good tale. Another detractor was the “head-hopping” or jumping from one person’s point of view to another’s without a change of scene.

The battle scenes are well done and James Douglas gets in some fictional but wonderful quips when taunting the English. The kings of England named Edward all come off badly, cruel and perverted, which undoubtedly they were. Robert the Bruce comes across as a melancholy, weak-kneed and reluctant king. Douglas is his backbone.

It’s a well-written story full of excitement, intrigue, betrayal and treachery. It held my interest and will inspire you to praise the courage of the Scots who only wanted freedom.