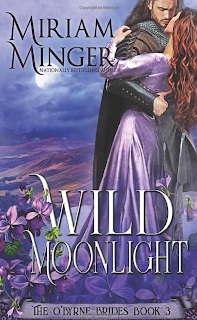 This is book 3 in the O’Byrne Brides series and I recommend you read them in order as they are related and later books refer to couples in the earlier books. No date is given but presumably this story is set in the time of the others, in the early 13th century.

It’s the story of Nora MacTorkil, the daughter of the richest merchant in Dublin, who flees a dreaded betrothal to a wild Norseman and, in the moonlight, runs along the dock and tumbles into the River Liffey. She is saved by Niall O’Byrne, who was drunk on the dock, still in misery for losing the woman he wanted. Niall is the brother of a rebel and decides to marry Nora to save her and then takes her to his family compound.

At the family’s home, we get to meet other characters, whom you would know if you have read the earlier books in the series. They make cameo appearances here. Knowing the Norse will likely come, they prepare for battle. Nora, a sympathetic person, makes friends and finds a new home. Not much history here but Minger does paint a medieval background that reflects the different factions in Dublin of the time.

All comes right in the end for a happy ending to a well-told tale.

On a Wild Winter’s Night