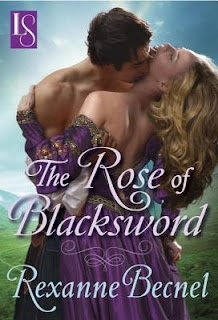 Set in 12th century England, this is the story of Lady Rosalynde of Stanwood, a young beauty whose father consigned her and her young brother to live with their aunt and uncle when their mother died years ago. And now Rosalynde must travel home to Stanwood Castle to tell her father her brother has died.

On the way to Stanwood, outlaws set upon Rosalynde and her knights. She and her page escape, but the page is wounded and Rosalynde seeks the only help she can find—that of a condemned criminal—agreeing to handfast with him to save him from the gallows if he will help her get home. The outlaw they call Blacksword is really Sir Aric of Wycliffe, a knight of renown, who is none too happy about being nursemaid to a lady and her wounded page—he seeks only vengeance on those who falsely accused him of crimes. But when he learns that Rosalynde is now her father’s only heir, he decides to seek more than a reward—he wants to make their handfast a real marriage to gain her and her lands.

This is a great story, well told—a page turner. Though there is no real history, there is a genuine historic feel and a real historic setting. Sir Aric is a noble knight but also a wily one, and Rosalynde (“Rose”) is not indifferent to his wooing. But her father sees Aric as a criminal and requires him to work as a servant at Stanwood Castle. Aric stays, rising to become a man at arms constantly reminding Rosalynde that she is his wife.

Lots of action, mystery and adventure with an exciting ending. I recommend it.