Alexandra Ripley’s FROM FIELDS OF GOLD – Unusual Love Story of the American South and Aristocratic London in late 19th Century with a Great Heroine. 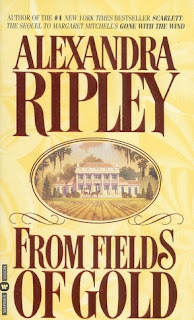 The story begins in the South in 1875 and tells of Francesca (“Chess”) Standish, raised to be a lady but at 30, the Civil War has left her with only a rundown plantation and a patent on her grandfather’s machine to make cigarettes. Once her life was filled with laughter, now she is gray and glum. She wants to be married and has all but given up hope until Nate Richardson comes along.

Nate is smart, handsome and ambitious, and desperately wants to gain the patent for the machine that makes cigarettes. When Chess, who is 8 years his senior, tells him he can have the patent if he will marry her, he agrees.

Ever since he was a teenager, Nate has been in love with the girl who became his brother’s wife. He shows Chess no passion, believing she is not interested and finds his pleasure elsewhere. Chess is so in love with him, she is willing to take the crumbs he offers her. Chess is a heroine to love: brave, smart and willing to wait for what she wants. She knows Nate doesn’t love her but she vows to become the business partner he will respect. And she does, sharing with him his dreams and his passion for the tobacco industry and helping his dreams become reality.

Though he admires her, Nate is not faithful. But a trip to London will show her the affection she has long missed and awakens in her the girl she once was.

The story reflects the author’s deep research into the tobacco industry in the South and the era of the late Victorian period in London. She captures the life of the idle rich as well as the Americans who led the development of new industries and discoveries. Rich in detail, even as to fashion, with splendid characters, including some actual historical figures, Ripley have given us a great tale. You must wait till the very end for that happy ever after, but I assure you, it’s coming.

I didn’t want to put it down! It’s a keeper!