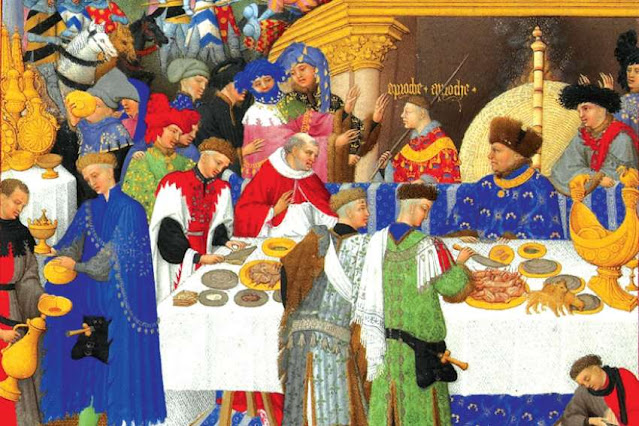 Not surprising, food was a major part of a medieval Christmas. The holiday came during a period after the crops had been harvested and there would be little to do on a farm. If animals were not to be kept over the winter, now would also be a good time for them to be slaughtered for their food. This could leave a bounty of food that would make Christmas the perfect time to hold a feast.

England’s King John held a Christmas feast in 1213, and royal administrative records show that he was ordering large amounts of food. One order included 24 hogshead of wine, 200 head of pork, 1,000 hens, 500 lbs of wax, 50 lbs of pepper, 2 lbs of saffron, 100 lbs of almonds, along with other spices, napkins and linen. If that was not enough, the King also sent an order to the Sheriff of Canterbury to supply 10,000 salt eels.

Even for those who were not so wealthy the Christmas meal was still elaborate. Richard of Swinfield, Bishop of Hereford, invited 41 guests to his Christmas feast in 1289. Over the three meals that were held that day, the guests ate two carcasses and three-quarters of beef, two calves, four does, four pigs, sixty fowls, eight partridges, two geese, along with bread and cheese. No one kept track of how much beer was drank, but the guests managed to consume 40 gallons of red wine and another four gallons of white.

Feasts were also held among the peasants, and manorial customs sometimes revealed that the local lord would supply the people with special food for Christmas. For example, in the 13th century a shepherd on a manor in Somerset was entitled to a loaf of bread and a dish of meat on Christmas Eve, while his dog would get a loaf on Christmas Day. Another three tenants on the same manor would share two loaves of bread, a mess of beef and of bacon with mustard, one chicken, cheese, fuel for cooking and as much beer as they could drink during the day.