Ellen O’Connell’s EYES OF SILVER, EYES OF GOLD –Hard Bitten Hero and a Woman Whose Tenacious Love Will Not Let Him Go! 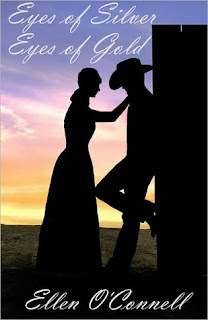 O’Connell is one of my favorite authors. She brings the Old West to life. This one is set in Colorado in 1885. It’s the story of Anne Wells, who at 28 may be a spinster but she’s not about to accept a man her father would force her to marry. In her escape from her home, she inadvertently runs to Cord Bennett’s small ranch.

Cord is the half-Cheyenne son of a wealthy rancher and considered by many to be the very devil. He lives alone raising horses and when Anne shows up, he’s delighted, until her father and some hired guns come looking for her. Her father's fury leads to violence against both Cord and Anne. Everyone, save Anne, believes the worst of Cord.

Cord is one of those heroes who no matter what life throws at him, and the horrible way people talk about him, he still manages to keep his honor and defend the weakest, even at great cost to himself.

O’Connell has a clever way of drawing us into Cord’s mind, seeing the world as he does—as his enemy. At one point in the story I thought to myself, if one more bad thing happens to him, I’m gonna scream. But I digress. Suffice it to say, he’s the kind of hero any “real” woman would love. Anne is feisty and courageous, a heroine worth cheering. Together they are a remarkable couple, but it takes them a long time to realize they are perfect for each other. O’Connell portrays them so well, it’s addictive. Oh yes, there are the “good citizens” of Mason, Colorado who do nothing and the really bad villains who do only evil.

Many of the action scenes in this story deal with raising and training horses and, in one case, an amazing race through difficult terrain. O’Connell describes it so well you feel like you’re riding the horse, following Cord’s brilliant strategy and urging him on. Obviously O’Connell knows horses and knows how a good man trains one. It was a delight to read this. Though instructive, it never took away from the romance developing between Cord and Anne.

One of my favorite passages in the story was a thought the heroine has: “…Anne believed she would in the end hear the words she, like all women, longed to hear, but if he never spoke of it, she would be content with this. He loved her, and she knew it, and he was capable of such tenderness it left her trembling, overwhelmed by her own love for him.” Ah…now that was well done!

It’s a great story, well told. You will love it, I promise.