Victoria Holt’s THE SHADOW OF THE LYNX – Intricate Plot, Complex Love Relationships and a Surprise Ending! 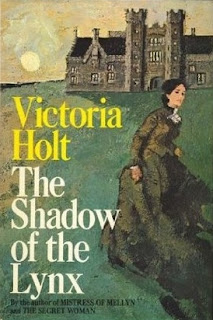 Set in the Victorian era, this is the story of Nora Tamsin whose father died in Australia searching for gold. Now, she is to travel there to become the ward of her father’s business partner Charles Herrick, who because of his startling eyes, is known as the Lynx. She is attracted to his son, Stirling, a handsome man who is kind to her. But the Lynx has other plans and his effect upon her is overwhelming.

Holt does a great job of bringing us interesting characters. We see Australia as it was, the rough life on the edge of the bush. And we see the country life in an English mansion where secrets reside.

This story takes you from England to Australia and back again with complex relationships. Those who end up together will surprise you. Treachery lurks in England and the White Ladies estate where the Lynx was sent away in shame that was not of his doing. He wants revenge and will do much to achieve it.

Fans of Victoria Holt (of which I am one) will love this. And the ending is a surprise!