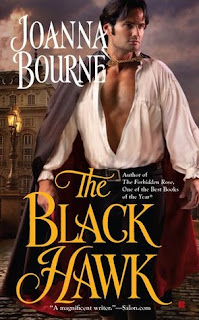 The fourth installment in Bourne’s Spymaster series brings us Adrian’s (Hawker’s) story. We met Sir Adrian Hawkhurst in prior episodes, always a charmer, always a man who loved women. We also caught a glimpse of the French girl, Justine DeCabrillac. Both are spies and once they were lovers. She was in the French Secret Service and Adrian, now head of British Intelligence, worked for England. After being separated for over 15 years, Adrian is happy to have her back in his bed but he didn’t count on her arriving there half dead with a wound caused by one of his own black knives. But that is where she ends up when an assassin tries to kill her—an attempt to frame him for murder.

Bourne does a great job of showing us how the characters of Justine and Hawk were forged in the fire of difficult circumstances early in life and then shaped by deep rents in history. We knew Hawker’s woman would have to be unusual, right? Well, she is! The action is complex and there are many players. You have to be awake to hold all that is happening in your head. Some of our favorites, Doyle and Pax, return for special appearances.

Though they first met in the French Revolution when they were still children really, Hawker and Justine grew up to be talented and smart agents with a lot to offer their countries. The story is told through a series of flashbacks as their paths keep crossing. (You have to be willing to jump around to get the full picture.) My only negative is the time they were separated—years. I didn’t like it when, after 5 years of being lovers, Justine suddenly ends their relationship because she finds he means too much to her. Then they aren’t together again until their late 30s when we finally catch up with them in 1818, which was a bit sad, really. So many lost years. Unusual for a romance. (Was he celibate all those years? No, I didn’t think so either…) Still, it’s a well-written, interesting tale, and includes the kind of historic detail (France and England from 1794-1818) we have come to love in Bourne’s work.

The series so far—all recommended: