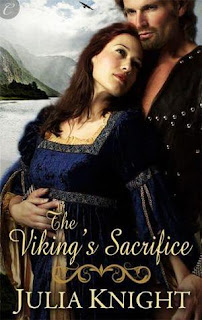 This is an unusual Viking tale set in Northeast England in 836 (the beginning) and Norway in 844. This is the story of Einar, who as a young man goes raiding with his brothers and sets upon a village in which a girl named Wilda lives. Her mother is slain before her eyes by one of Einar’s brothers, Bausi, who then kills Einar’s older brother and tries to kill Einar. But Wilda saves him and then he saves her, telling her to “renn, renn” (run, run). Years later, they meet again when Wilda is captured in another raid and brought back to Norway.

Bausi, having been thwarted in his plans to kill both of his brothers, threatened Einar with a curse: he will kill their younger siblings if Einar speaks of what happened. To make matters worse, Bausi spreads a lie of Einar’s cowardice, which the whole village believes.

The story was well research and has an authentic feel. Knight’s writing is excellent and she made good use of the language differences in giving us a picture of what life might be like for the thralls taken captive by the Vikings. Einar’s feelings for Wilda were sweet and tender.

There’s a fair bit of introspection, which at times slowed an otherwise absorbing story. The story was a bit depressing with Einar continuously the recipient of his people’s scorn and living on the edge of society. But finally, he stood up and fought. Still, it was a well-told Viking tale about two young people who eventually cross their cultures to find love.