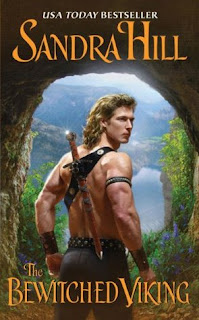 While this one of Hill’s many Viking stories is not fantasy, it is fanciful. And witty, at times funny and, while not a serious historical romance and sometimes modern sounding, it is also very entertaining.

Set in 952 AD, this is the story of Tykir Thorksson, a wealthy Viking trader in amber, who is sent by the King of Birka (present day Sweden) to find a redheaded witch who, the king is certain, has cursed his male part. The target of Tykir’s quest, Lady Alinor of Yorkshire has been thrice widowed and is done with men. She prefers to be left alone with her sheep. But her two ridiculous brothers want to betroth her once again, this time to a fat man Tykir dubs the Lord of Lard.

Alinor denies she is a witch and resists going with Tykir, but he gives her no choice and so she and her dog and some of her sheep follow Tykir into Northumbria and eventurally to see the king. In a clever story, Tykir comes to believe she is a witch when things happen he cannot explain.

It took me a while to get used to Hill’s style as she begins each scene with a line that forecasts what you’ll see (I thought it was someone’s thinking but it’s the narrator), but eventually I rather liked that feature. She does manage to drop in some historically interesting tidbits so that I could see she knew her subject well and had done much research for her story. The place names are all there, too. The characters are wonderfully drawn and some quite funny. Bolthor the Skald comes to mind with his silly verses.

If you like witty, off beat historical romances with extended love scenes, this is a good one. I suppose all of Hill’s may be similar. I would read another of hers, particularly Rurik’s story (The Blue Viking).

The list of her Viking romances that Hill says are not fantasy:

A Tale of Two Vikings

The Viking Takes a Knight