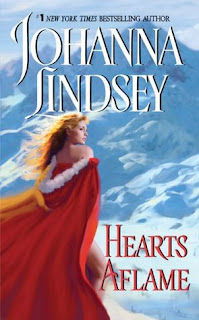 Hearts Aflame is the second in the Haardrad Viking family trilogy, but it can be enjoyed as a stand-alone. It is quite wonderful--an engaging story and well-told. In a bit of a twist, it’s a Saxon lord capturing a Viking maiden.

Set in the late 9th century when Vikings sailed south to England, Scotland and Ireland to raid, it tells the story of Kristen Haardrad, the independent, strong-willed and much loved daughter of a wealthy Viking merchant (whose story is told in book #1). Having spurned her many suitors because she can find no spark of love with any of them, Kristen stows away on her brother's ship believing he is headed to the southern coastal towns for trade where she hopes to find a husband. But her brother is not sailing to trade, but rather to raid. And he is not pleased when he discovers his sister is aboard his ship. Still, he proceeds with his plans.

All goes awry when Kristen is captured and made the slave of the Saxon lord, Royce of Wyndhurst, a favored warrior of King Alfred.

Royce is a tough but fair leader who is betrothed to a manipulating female he doesn't really want. He fights his attraction to his beautiful Viking slave, but Kristen, who has finally met a man who stirs her passion, has decided he is her "heartmate" and she will have no other. Royce wants her in his bed, but Kristen is proud and determined to win his heart.

Lindsey keeps you intrigued with rich characters, snappy (and sometimes funny) dialog, great action scenes and wonderfully believable tension between Kristen and Royce. I loved this story. It's definitely a keeper!