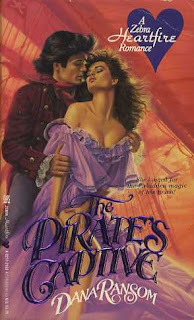 This book was first published in 1987 and it’s worth finding if you are a fan of pirate romance. While no date is given, it appears to be set in 18th century when Williamsburg was the capital of the Virginia Colony.

It’s the story of Lady Merrit Ellison who, while sailing to the Virginia Colony to meet her betrothed, Lord Whitelaw, was taken hostage by the pirate known as the Spanish Angel (for his handsome face). He also stole her dowry of priceless pearls. But she gave him her innocence and then fell in love with the rogue.

Nicholas had vengeance on his mind when he took Lady Merrit while releasing the others on the ship his pirate crew plundered. He wants to ruin Lord Whitelaw and his family for the terrible wrongs they did to him and his mother. Even his love for Merrit will not interfere with his plans. He is a man of many faces with keen intelligence and a thirst for revenge. Lady Merrit is a survivor with spunk.

On their way to a happy ending, they experience many adventures. Marrit cannot resist her “Colley” even if his intentions are not always honorable.

The book will certainly hold your attention as there are many twists and turns and lots of worthy secondary characters. The author does engage in some head hopping, which took me a while to get used to, and some errors in forms of address, as well as some improbable moments. Still, it’s a page-turner and a classic. Pirate romance lovers will want to get a copy.

Email ThisBlogThis!Share to TwitterShare to FacebookShare to Pinterest
Labels: Pirate/Privateer