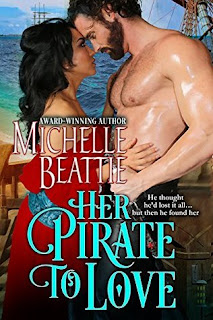 Set in 1664 in the Caribbean, this is the story of pirate Sam Steele, a name assumed by Cale Hunter, to escape the tragedy that befell him when his wife and son disappeared leaving behind evidence of slaughter.

Grace Sullivan, an Irish lass, who defied her parents and took a ship to Ireland, or so she thought. Instead, she became the captive of the ruthless pirate, Roche Santiago who raped and tortured her, enjoying her pain. When Steele rescues her, she is reluctant to accept his help, fearing to trust no man, especially when she realizes she is pregnant with Roche’s child.

Amazon lists this as the first in the Sam Steele series, but it has the feel of a book in the middle of a series as some of Steele’s couple friends are characters (toward the end) and their stories are alluded to. It can be read as a stand alone, however.

There’s a lot of introspection in this book, some seemed repetitive, but if you don’t mind that (or you like it), you will enjoy the read. It’s well researched and there are some exciting fighting scenes, including one at the end when Roche Santiago shows up. It’s a pirate romance so some violence is to be expected. I enjoyed the fighting scenes but not Roche’s cruelty which is truly awful.

What surprised me: Grace is to give birth to the child of the ruthless, evil pirate who not only raped her, but also tried to kill her, yet she never worries about how she can raise a son that is his spitting image. I can see her having angst over that and then deciding to love the child anyway, but Grace never even has a thought about this. That seemed odd. But overall, it's a good story and pirate romance lovers will be happy.