Jennifer Horsman’s MAGIC EMBRACE – Spies, Pirates, Magic and a Heroine you will love! 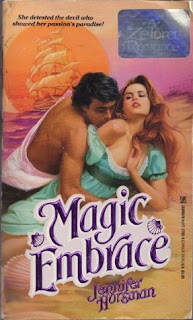 February is Pirates and Privateers month and I’m starting with one by a favorite author.

Set in 1805, this is the story of Juliet Stoddard, a 17-year-old innocent who, as a young orphan, is sent from France to England to live with her cruel and twisted uncle. To pay back her mother who he despised as a loose woman (she wasn't), he kept Juliet isolated and beat her for any little thing. She was not even permitted to befriend her cousin, Clarissa, the uncle's daughter, who was living in the same house.

Clarissa hates her father and lives a rebellious life including sleeping around. When Clarissa's father catches her with a young man, Eadric, Clarissa cries rape and the uncle brutally murders him. It turns out Eadric was the brother of the infamous pirate Black Garrett, who now seeks revenge on Clarissa and her father. Though Garrett is considered a traitor in England, a pirate for Napoleon, Garrett is really a British lord and a spy. Garrett returns to England to seek his revenge, killing Clarissa's father and kidnapping the young woman he believes is Clarissa--but is really Juliet.

Though Juliet, a sweet saintly girl, protests her innocence and tells Garrett she is not Clarissa (who set her up), Garrett still rapes her. Some might call it forced seduction but Juliet called it rape. (The love scenes, by the way, are very well described.) First, Garrett takes her by force, then by magic as he holds her prisoner on his ship--in his cabin. I include this just so you know we are dealing with a true cad.

Magic and mysticism are bound up with the story and there are dark hints of mysterious happenings. Garrett spent years with Eastern religious men and that forever changed him. He uses the magic to manipulate people when the need arises.

Even with the hero being a cad for most of the story, and a few nits I would have changed, this was a compelling tale, a story I could not put down and. if you love pirate stories, I believe you will like this one. Howsman is a master storyteller!