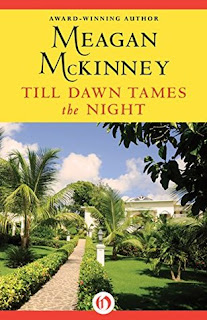 This romance has it all: superb writing, intriguing plot, a tortured (but strong) hero and a heroine who won't give up. Oh yes, and did I mention pirates?

Set in 1818, this is the story of Aurora Dayne, raised in an orphanage where she stayed on to become a teacher (think Jane Eyre), until the day she received an offer to become a lady's companion in Jamaica. Desperate for a new life, she leaves behind her past and strikes out for adventure, never knowing the invitation came from a pirate named Vashon.

Vashon was the heir to Blackmoor but his twisted half brother sought to kill him and steal the title. At 13, Vashon was sold into white slavery in Algiers and that experience forged the dragon that lives within him. He has grown wealthy as a merchant seaman though he is not above piracy. He has lured Aurora to the Caribbean because her father, a thief, gave her the key to finding a cursed emerald he stole, the Star of Aran--an emerald Vashon's half brother is desperate to have.

Much of the story takes place on the high seas where innocent Aurora is taken captive by Vashon, who will use any method, including seducing Aurora, to get the clues to the emerald. But Vashon doesn't bargain on Aurora's fierce goodness that sees the lost goodness in him.

A great story of lost innocence, unrequited love and passionate moments that won't be denied...all set aboard ship and turquoise Caribbean seas. You will not be disappointed.

However, I must say that it was most unfortunate McKinney engaged in disparaging comments about Christianity and the message of William Wilberforce (who was truly a great man who fought slavery all his life). It was also unnecessary to the story. If you can overlook the author’s obvious bias, it’s otherwise a wonderful historical romance.