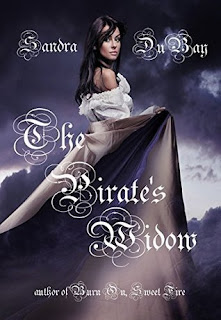 The story begins in 1721 as Caroline Llewellyn is widowed when her pirate husband is hung for his past deeds. Though she was also condemned for piracy, Callie was freed when gunpowder exploded causing a distraction and her bonds were cut—something her husband had arranged. She flees to Cornwall with 10-year-old Jem, her husband’s cabin boy, where they take up life in the village of St. Swithin near Penzance as “Caroline Jenkins, the widow of a missionary, and her son, Jem.”

In Cornwall, Callie meets Sir Thomas Sedgewyck, the richest man in the area, who is taken with her and thinks to make her his wife. He buys her a wardrobe of clothes, which Callie is forced to accept. And there is another man she met on the beach—Finn Blount, the smuggler—and his dog Cyrus. Callie rather likes the man Finn, who is rough but honorable. She wanted to lie low, but it seems her beauty, an arrogant man’s desires and the jealousy of other women won’t allow it.

This is a well-told story of second chances, of life after a great love, and of staying true to who you are. Du Bay gives us a wonderful glimpse of small town life in 18th century Cornwall with many wonderful details and at a time when pirates were active and smugglers dotted the coast. The characters are vividly portrayed and the heroine a worthy one. The love scene is very abbreviated but fits the story.

It's not a long tale but it's a good one.