Amanda Hughes’s THE PRIDE OF THE KING – Absorbing Tale From 18th Century America—a Heroine to Love and a Ship of Pirates! 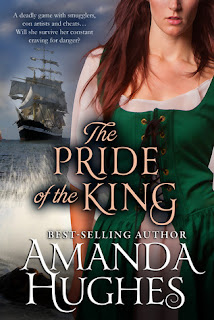 Set in French New Orleans in 1748, this is the story of Lauren De Beauville, daughter of French aristocrats who died leaving her and her sister orphans to be raised by nuns. When she is 15, her sister joins the order and Lauren is forced to marry an old man from the English colonies who doesn’t speak French. She is rescued from that marriage before it’s begun by a hurricane that sweeps her away on her wedding day to another life. Eventually she is forced to leave that other life, too, and ends up in New England, where she joins with con artists who use her as bait to lure aristocrats into business ventures.

There are many twists and turns in this complex story that finally sees Lauren onboard a ship of pirates and misfits who serve a master criminal, their captain, who smuggles guns and other goods, selling them to both the French and the English. Captain James St. Clare wants Lauren to be his contact with the French, but it’s a very dangerous assignment and she will have to sell herself to accomplish it. But St. Clare, an enigmatic figure, watches over her.

Most of the story is told through the heroine’s point of view with the exception of short snippets in the minds of other characters. And there is a huge cast of characters as you can imagine from the different “lives” Lauren experiences. You feel for Lauren as a young innocent with an adventurer’s heart who faces one crisis after another and yet always manages to triumph. When the black moment comes—and there is a black moment—it is very real and very believable. I loved Lauren’s courage and her determination—and her kindness. No wonder the hero will not give her up.

I can’t say enough good things about this book. I don’t want to give away the mystery by saying more about the story except that she peels back the layers like an onion—expertly.