Virginia Henley’s THE HAWK AND THE DOVE - A Privateer to Love, a Sea Hawk, and a fiercely independent Irish lass...oh yes! 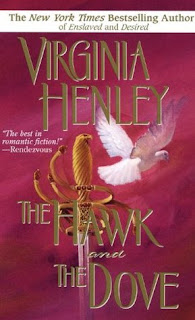 I love Henley’s attention to historic detail and her ability to weave a captivating tale. This one is no different. The story is set in 1586, when Queen Elizabeth ruled England and her sea hawks ruled the seas, robbing the Spanish fleet to fill her coffers. Captain Shane Hawkhurst was Queen Bess' favorite. She named him “the sea god.” He was, in fact, not the son of Lord Hawkhurst, but the son of an Irishman named O'Neill, the Earl of Tyrone. But his English father claimed him as heir, and when Shane’s father died, Shane became Lord Hawkhurst.

Shane had promised his father he would marry, and to stave off Queen Bess’ jealousy and because he did not really want a wife, he had his solicitor find a country lass who had some land in Ireland he wanted and married her by proxy. Little did he know his new wife was the red-haired Irish vixen, Sara Bishop, referred to by her jealous half siblings as “Sabre Wilde” after her dead father and his sword. Shane planned to have his brother Matthew take Sara to one of his estates and dump her there, never wishing to meet her. Ah, but Sara—as Sabre—has a different plan. She intends to go to Court and seduce her husband and become his mistress, making him her love slave and having her revenge.

You have to love this heroine. She is fiercely independent, courageous, feisty and smart. Just the woman to tame a wild man like Shane Hawkhurst. And Shane is a man worthy of taming. Both have Irish blood running through their veins—at a time when Queen Elizabeth feared the rebellious Irish. So the sparks fly continuously. It’s one of the things Henley does so well—excellent characters and a plot with great twists and turns!

Henley’s love scenes are unique and fit the people and the story, so very well done, very sexy, tasteful and not contrived. It is so worth it to dive into one of her complex, winsome tales.

In addition to wonderful characters, a great plot and interesting history, she has included some great one-liners. One of my favorites was: “...to be Irish is to know the world will break your heart before you are thirty”. So true.

Get this one; you won't regret it!