Brit Darby’s EMERALD PRINCE – A Wonderful Tale from Medieval Ireland… A Legend, a Worthy Hero and a Courageous Heroine! 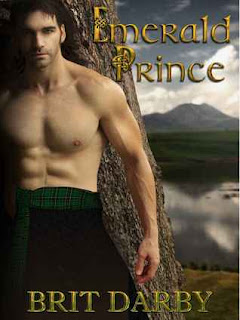 March is Irish month on Historical Romance Review and I’m starting with one of my very favorites. It comes from the writing team of Patricia McAllister and Fela Dawson Scott. A wonderful story set in 13th century Ireland. The novel reflects considerable research and careful attention to historical detail of 13th century Ireland.

I thoroughly enjoyed it!

The story begins in 937 AD (prologue) on Inisdeven Island in Eire (Ireland) as the Nordic Vikings descend on St. Gall’s priory. The only monk remaining alive is young Donal to whom a dying Viking gives a large emerald that he says must find its way to a female in his line—a descendant of the Fairy Queen Fand.

Hundreds of years later, in 1209 in England, Lady Alianor Coventry (“Nora”) is widowed when her husband, an older knight, dies. He was a man she greatly loved and admired who was like a father to her. King John, tired of his pregnant wife Isabella, is pleased to learn the fetching young heiress of Coventry is now free to be his plaything. But Nora wants to help her people, something the king has no intention of allowing. Given a choice between becoming the king’s leman or marrying the Norman madman Quintin de Lacy, she chooses neither, but is nevertheless shipped off to de Lacy in Ireland. On the way, she is abducted by the outlaw, Liam Caomhanach, the one the Irish call “the Emerald Prince,” a man foretold by legend.

I thought the authors did an excellent job of incorporating history and the Legend of the Emerald Prince into the story. That is so important to me as I like real history in my historical romance. They have created wonderful characters with a rich backstory—and some real life persons, like King John and Queen Isabella. Both Liam and Nora are compelling, unselfish and courageous to the end.

It’s a great tale, well told, and I recommend it for you lovers of Irish medieval romance.