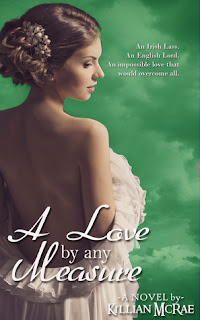 The story begins in Killarney, Ireland in 1872 when poor Irish tenant Maeve O'Connor and her father, Rory, can’t meet their rent payment. She goes to their English landlord, Lord August Grayson (name should be August, Lord Grayson, I do believe) to ask for an extension of time. Despite their different stations, August and Maeve played together as children, but one day all that was shattered when August’s English father belittled her and August went along with it. Now, years later, August’s father is dead and August has returned to Ireland. He agrees to grant Maeve the time she needs to pay the rent, even forgives the rent, if she will give him time alone to do with her as he wills. Ahem.

August set up their “arrangement” fully expecting the chaste Maeve to end it before it goes “too far”. He hopes she does so he can claim the mineral rights to the land on which her cottage sits. But Maeve doesn’t seek to get out of the arrangement. And, as it continues, both grow deeper in their affection and sexual attraction for each other.

There are many twists and turns in this story and some history of what transpired in the late 19th century in Ireland. I must say this story pulled me in even though I did not like the quick and numerous changes in point of view, the jumping around from 1866 to 1872 (and back again) and the location changes from Ireland to England to Boston. It was like a tennis match at times. Still, I could not stop reading.

I loved the chemistry between August (who was half Irish himself) and Maeve. And she was a very brave, smart girl, except possibly when it came to August’s seduction.

The negatives here were (1) the hero’s failure to be honest with Maeve about something really significant, (2) killing off the man who was possibly the most honorable of all the characters, and (3) the ending, which has August in a role I thought out of character for him given his education and wealth, but still, it’s a page-turner and a very moving love story.