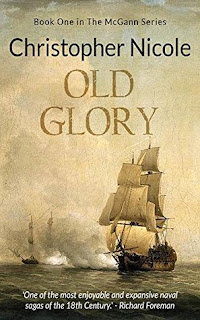 This is the first book in The McGann saga. The story begins in 1769 when young Harry McGann, an excellent seaman engaging in smuggling along with his village, gets into a fight with the squire’s son (a very arrogant young man) while trying to save the man’s daughter from a fall. Harry is told to get out of town for a while and he goes to sea, bound for New York. That was a terrible experience but just before he left, he met Elizabeth Bartlett, the daughter of a wealthy New York merchant. He vows to return, well dressed and with coin in his pocket.

No matter his good intentions, Harry is forever involved in fights with despicable men. He even experiences treachery from his fellow sailors whose allegiances change quickly. But in all he encounters, he comes to love America. And, once Harry he hooks up with John Paul Jones, he becomes involved in the formation of the American Navy. But he never forgets Elizabeth.

It’s an engaging tale well told (though the wealth of typos need to be corrected) with some exciting battles at sea. Harry is a flawed but loveable hero and Elizabeth, though constant in her affection for him, also makes some bad decisions. Still, all comes right in the end and we are given a glimpse of America’s early naval ventures.

This is historical romance at its roughest.