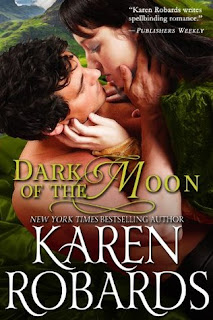 I’m a huge fan of Karen Robards historical romances and many of them grace my best lists.

Dark of the Moon is another great romance and different because of its plot detour in the middle. It begins in Ireland in 1784 and tells of Caitlyn O’Malley who at 15 has lived on the streets of Dublin disguised as a lad for so long, she no longer sees herself as a girl. When she tries to pick the pocket of Connor d’Arcy, Earl of Iveagh, an Irish nobleman, believing him to be English, she is caught.

Connor, having great sympathy for homeless lads, offers “the boy” a job on his farm with “three square meals a day.” Hungry, she accepts, traveling with him to Donoughmore Castle where Connor and his younger brothers farm sheep in the shadow of the burned out castle that was once their home. Caitlyn never considers her feminine gender will be discovered. She is, of course, wrong.

Connor, whose family has suffered under the dreaded Protestant Ascendency (“the colonizers of a once-free land”), takes on another persona at night—the Dark Horseman. Riding with his brothers, all dressed in black, Connor robs from the rich Ascendency to give to Ireland’s poor. He’s a very worthy hero and, of course, Caitlyn falls in love with him. But there is a local landowner, an evil man, who covets what is Connor’s.

This is very well written with great characters and had me on the edge of my seat wondering what the feisty Caitlyn would do next. But there’s a turn in the middle that takes Caitlyn to London. You’ll want to read it all.