Gretta Curran Browne’s TREAD SOFTLY ON MY DREAMS – A Wonderful, Poignant and Deeply Emotional Story of a True Irish hero 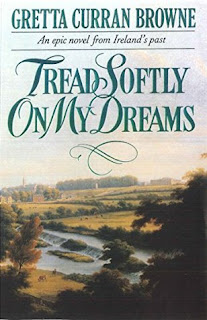 Robert Emmet is a young man born to Ireland’s Protestant upper class with a promising career ahead of him in science. From his parents he acquired a deep love of Ireland and a commitment to justice. From his brother Thomas, a lawyer, he acquired an understanding of the divisions and inequalities of his country.

In 1798, Robert’s life changed from a future among the elite to a strong role in the risings wherein the Irish sought freedom from English rule. Robert refuses to take an oath of allegiance to England, thus giving up his hope of a scientific career and all the privileges of his class to join the United Irishmen, a society dedicated to the union of Protestant and Catholic. When the rising is defeated and their leader (a nobleman) cruelly allowed to die in prison, Robert is forced to flee Ireland. But even as his boat sails away from his beloved homeland, he looks back and knows he will return to the cause of his country’s liberty, and to the girl he has fallen in love with, Sarah Curran, the daughter of Ireland’s most talented lawyer.

Robert returns and meets Anne Devlin, a passionate and brave Catholic country girl, who falls in love with him and becomes his most loyal housekeeper of the safe house for his fellow rebels.

This is a well-written historical account of what transpired with enough fiction added to make this a compelling story. I loved it even though it made me terribly sad. You see, I knew how it ended. The author has given us a hero to love and admire. I confess I wanted to slap Sarah Curran at times and really wanted Robert to see what a grand mate Anne Devlin would have been.

There was one thing that seemed to be missing from the story. These were people who cherished their faith whether Protestant or Catholic yet there was no evidence of it in this story until the very end and Robert's confession of faith in Christ. Otherwise, there was no church, no Mass, no prayers.

As for the English ruling Ireland, I already had a low view of England’s treatment of the Irish (and the Welsh and the Scots) and this only confirmed it. England’s arrogance was/is too great to see another people’s love for their own country and their desire for freedom.

Thank you, Ms. Browne for bringing this wonderful history to life. You have done a great job! (But you do need to get the typos corrected; there are many).