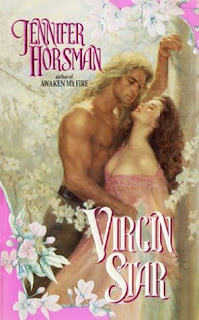 This is another of Horsman’s shipboard historical romances, but with an Irish hero and a heroine who doesn’t know who she is.

Set in 1823, this is the story of a young Englishwoman who, as a child, was taken from England to Malacca near the South China Sea. (We don’t know why for most of the book.) When the story opens, she is 21 and has been beaten and dumped on the doorstep of Captain Sean Seanessy, a wealthy Irish sea captain living in opulent splendor in England where he’s become an asset to the British government.

Sean is a man of the world who takes his pleasure wherever he finds it. He is smitten by the girl with amnesia who wears only a ruby necklace and calls her “the virgin star.” He names her Shalyn after the wind fairies of Ireland. She has no memory save for Malacca and the nightmares that haunt her of a beach with human skulls stuck in the sand. Seanessy is intrigued when he discovers the intelligent, well-educated young woman has been trained in Oriental fighting techniques, and of course, his attraction is immediate.

Consumed with an assignment from the British government to destroy a cache of opium held on an island near Malacca by a French duke, Seanessy has no time for the troublesome young woman. He believes the French duke has already made an attempt on the life of his half brother and his wife. It’s a game of cat and mouse that finally leads to Seanessy’s sailing for Malacca unaware that Shalyn has stowed away onboard. As they sail toward the duke’s island, Shalyn’s memories begin to return, both those of England as a child and in Malacca.

Horsman has created a wonderful set of characters in Seanessy’s crew, including a big dog named Oliver who takes a liking to Shalyn. There’s enough historical detail to satisfy the romance reader who likes more than “wallpaper” history and enough chemistry between Seanessy and Shalyn to make for an intriguing romance. (We don’t learn her true identity until late in the book.)

Note: Both the hero and heroine have light hair, the heroine’s described as golden blonde, notwithstanding the redhead on the cover.

Email ThisBlogThis!Share to TwitterShare to FacebookShare to Pinterest
Labels: Irish, love on the high seas