Georgette Heyer’s FRIDAY’S CHILD – A Rollicking Good Time for All! 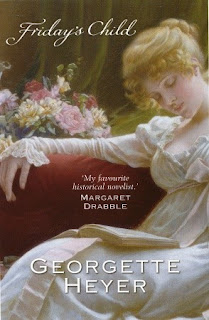 Rejected by the woman he wanted, the “Incomparable” Miss Milborne, young Viscount Sheringham defies his mother and says he’ll marry the next woman he sees to trigger a clause that will gain him his fortune. Which he does.

The very first woman he sees is his childhood friend Hero Wantage, a young and charmingly unsophisticated girl, who adores him but for whom he has little regard. Although she knows it will be a marriage of convenience, the marriage will raise her from life as a governess and allow her to live by Sherry, the man she loves.

In London, Hero soon discovers the world of the ton but doesn’t really know what is permitted and what is “bad ton”. Her marriage becomes a comedy of errors, as Hero tried to keep up with the fashionable and very unfamiliar society in which she now finds herself. Sherry intervenes, fearing she’ll embarrass them both. Finally he decides to send her to his mother, who loathes the girl. But Hero has another plan.

It’s a rollicking good story as Hero charms Sherry’s best friends and, for a while, it seems everyone is with the wrong partner. Sherry has to realize he loves his wife no matter the scrapes she gets into. All comes right in the end and Heyer leads the reader on a wonderful jaunt through Regency society.