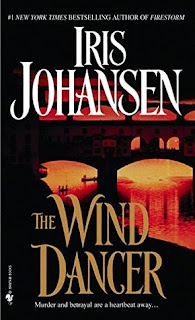 This is the first in the Wind Dancer trilogy and it is amazing, a "keeper".

Set in early 16th century northern Italy (1503), it tells the story of Lionello Andreas, oldest son of an Italian family that has held as its most treasured possession a small golden statue of the winged horse Pegasus that, according to legend, was given to their family at the fall of Troy.

The statue, known as the Wind Dancer, has been stolen from their city state of Mandara by Lion's enemy, Francisco Damari. In his effort to recover the statue, Lion decides to hire a thief and travels with his erstwhile companion, Lorenzo, to Florence where he buys a 16-year-old slave girl, Sanchia, who is known an expert at lifting men's gold. Lion quickly realizes he wants more from the brave and clever young woman than her thieving talents and takes her as his mistress.

Believing she has no ability to resist, Sanchia complies, as any slave would. In the process of helping Lion to steal the key to where the statue is kept, and in an act of great courage, Sanchia leads Damari away from Lion only to be captured by the demented and sadistic man. By the time Lion recovers her, she has been tortured and believes Lion did not honor his promise not to leave without her. As a result, she now believes her debt to Lion has been paid and demands her freedom. But Lion, whose feelings for her have grown into an obsession, will not let her go.

This is a story of passionate love in an unlikely place and, once found, denying it. The story is well told, the dialog gripping and the twists and turns complex. You will feel like you are there in Renaissance Italy. The physical relationship between Lion and Sanchia is explosive and sensual and Johansen does a superb job of describing it.

Like a tapestry with many threads coming together, Johansen has woven many lives into the story in a convincing manner. She has also created a great cast of secondary characters with their own passions and unique qualities. Lorenzo Vasaro, Lion's stalwart friend is an assassin with a jaded past and a wisdom that insists reality be pursued even if costly. He adds richness to the tale. I highly recommend this one.

Reap the Wind (a contemporary )