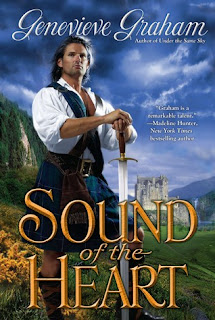 This is a sweeping historical saga, and companion to Under The Same Sky, Graham’s first novel. It covers more than a decade, and at times seems more historical fiction than romance but it does have a worthy love story running through it, so I consider it a crossover. It begins in 1745 with the Battle of Culloden that cut a dark scar on the history of Scotland as the English tried to wipe out a people whose desire for independence they could not abide.

Most of the story is told from the perspective of the hero, Dougal MacDonnell, whose father died in his arms at Culloden. Dougal doesn’t know the fate of his younger brothers but believes the youngest one may be dead. He believes his other brother, Andrew, with whom he is telepathically connected, may be alive. (Andrew’s story is told in book 1.)

Taken prisoner by the English and nearly starved, Dougal escapes with a young boy, Aiden, who Dougal protects as they travel to London and then back to Scotland where they live in a small crofter’s cottage for years.

Deep into the novel, Dougal discovers Glenna, a young Scots woman, and the two become lovers and live together for years only to be separated by the English and sent to the Colonies. Reluctantly, Dougal becomes a part of Montgomerie’s Highlanders wearing the only plaid allowed a Scot, the English Black Watch, as he searches for Andrew and Glenna in the Carolinas.

In her well-researched, superbly written saga, Graham shows the gritty side of war, the ugly filth of the streets of London, the irony of the Scots having to fight the Indians, rape of women (the heroine is raped), and the very real starvation faced in those dark days. It is rich in detail, superb in language depiction and the characters well developed. This is not, however, a classic historical romance given the nature of the events or the fact the hero and heroine are separated for long periods. Sometimes the focus is only on the hero’s adventures or the heroine’s perils (we don’t get the heroine’s point of view until the last third of the book).

It’s a story of great loss and survival when one would prefer death. (“Sometimes the sensation of loss was so intense it was as if someone had reached within her and yanked out whatever she needed to move forward.”) In the end it’s a story of the new life that can grow from such loss—and a new beginning, albeit with scars from the past.

It must have been like that for the thousands of Scottish (and Irish) who were driven from their countries by the English. It is an absorbing, worthy story that will give you a picture of what it was like to be a Scot and shipped to the colonies as an indentured servant for no greater crime than being a Scot. No wonder they became the backbone of General Washington’s Continental Army fighting with all their heart to enable America to throw off English rule.