Susanna Kearsley’s THE WINTER SEA – A Brilliant Story of Scotland’s Past Affecting its Future & Two Intertwined Love Stories. A Keeper! 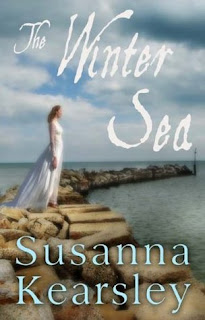 This was an unusual story for me. With a few notable exceptions, I don’t generally read time travel historical novels. And it’s difficult to characterize this one. It’s not straight historical romance, nor is it historical fiction, nor is it paranormal/fantasy or even time travel as such, yet it has elements of all these.

Part of the story is set in modern Scotland and part in early 18th century Scotland where, in the spring of 1708, an invading Jacobite fleet of French and Scottish soldiers nearly succeeded in landing the exiled James Stewart in Scotland to reclaim his crown. The story is also told in two voices, one in the first person (Carrie, the writer in modern times) and the other in the 3rd person, the voice of the heroine from Carrie’s family’s past and Scotland’s, Sophia Paterson.

Key in the telling of both stories is Slains Castle, a ruined castle in Aberdeenshire, overlooking the North Sea from its cliff-top site east of Cruden Bay (pictured below as it was). 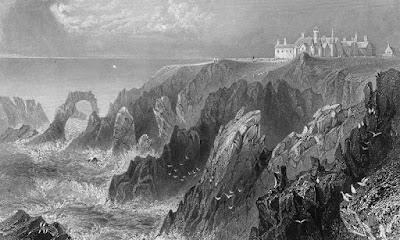 As her writing proceeds, Carrie begins to realize she is not just inventing a story set in history but experiencing the memories of her long ago relative. Sophia meets and falls in love with Mr. Moray, the Jacobite who works to bring the king back to Scotland. And Carrie develops a tendre for Graham Keith, the oldest son of her landlord. The parallels of the two stories and the two romances are uncanny and add to the intrigue. Both are well told and had me turning pages. Even though the ending dawned on me early on, the author kept me in suspense, wondering if it would be.

The characters are richly drawn, Graham (Carrie’s love interest) and Sophia being my favorites. I relished the thought that those who loved both Sophia and Moray were pulling strings for them. The language is beautiful, the descriptions vivid and all are woven together in marvelous fashion.

This is one for the keeper shelf.