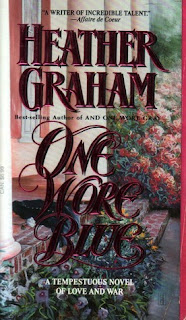 This is the first in the Cameron Saga’s Civil War trilogy (and follows the Cameron stories told in Graham's North American Women trilogy). These are stories rich in history, well told and with amazing detail, seamless dialog and a family of wonderful characters you will love.

One Wore Blue begins in 1859 with the Harper's Ferry incident involving abolitionist John Brown. Jesse Cameron is serving as a doctor for the federal troops under Jeb Stuart and his younger brother, Daniel, is serving under Robert Lee. They have grown up with the beautiful and independent Kiernan Miller in Tidewater, Virginia. Kiernan loves Jesse and is good friends with Daniel and their sister Christa Cameron. As they sense the approach of war, Jesse cannot abide a nation divided, but Kiernan is a loyal Rebel, a Virginian, who like Daniel, supports the Confederacy. Jesse will choose to wear the Yankee uniform to support the Union, and though Kiernan loves him and has given herself to him, she will marry another, a loyal Reb she does not love.

Right there, Graham had me. My heart was dying. Jesse was like all the Cameron men before him: tall, dark and handsome and strongly committed to the cause of liberty and truth--and capable of deeply loving his woman while brooking no rebellion. Ah...a REAL man. I wondered what Kiernan was thinking when she refused to marry Jesse. I wanted to slap her several times. But alas, she was a blind Rebel.

You will laugh and you will cry with this one, as you become a part of the lives of young people who were swept into the war that tore apart a nation and tore apart families...a time that shaped America. The ending is exciting, too. Graham has produced a series of keepers!

One Wore Blue
And One Wore Gray
And One Rode West