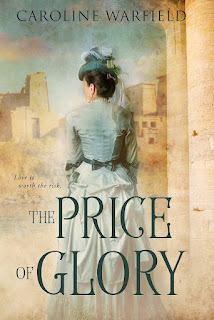 Set in Cairo in 1839, this is the story of Richard Mallet, who comes to Egypt hoping to unravel the secrets of the ancient Kushite language. Having obtained a license to dig, he sets out for Meroë, where the Blue Nile and White Nile meet. Analiese Cloutier, daughter of a medical minister, also comes to Cairo. She’s on a medical mission to vaccinate the people of Khartoum against smallpox, especially the women and children. Caught up in a hostile culture where life is cheap, she and her women healers are soon in danger.

Neither Ana nor Richard expects to be drawn into a romance but they are. Ana is a very modern woman, headstrong and independent who will have her way in all things. She has no intention of marrying which will destroy her healer career. Frankly, for nearly all of the book, she appears to have little interest in Richard Mallet. She has manipulated her father and an evil bey, who covets her, into allowing her to go on this dangerous mission. All will soon blow up in her face with treachery, poisoning and violence. Richard, too, is in danger and must claim Ana as his if they are to defeat the evil bey’s plans and survive.

The author has done considerable research to bring many historical details of the period to life as well as the lot of a woman who wants a medical career. There are foreign terms and place names that may throw you at first as the story is slow to develop but, half way through, it becomes exciting as the region explodes with anti-European violence and Ana and Richard must use their wits to escape. While Richard appears to care for Ana, any feelings on her part come late. I loved his uncle the duke whose character came through on the page. Richard’s guide and Ana’s maid also add richness to the story.

Historically accurate, with a great Author’s Note at the end, this brings the reader into Egypt at time of great upheaval which makes for some exciting scenes. Readers looking for a new adventure will relish diving in.